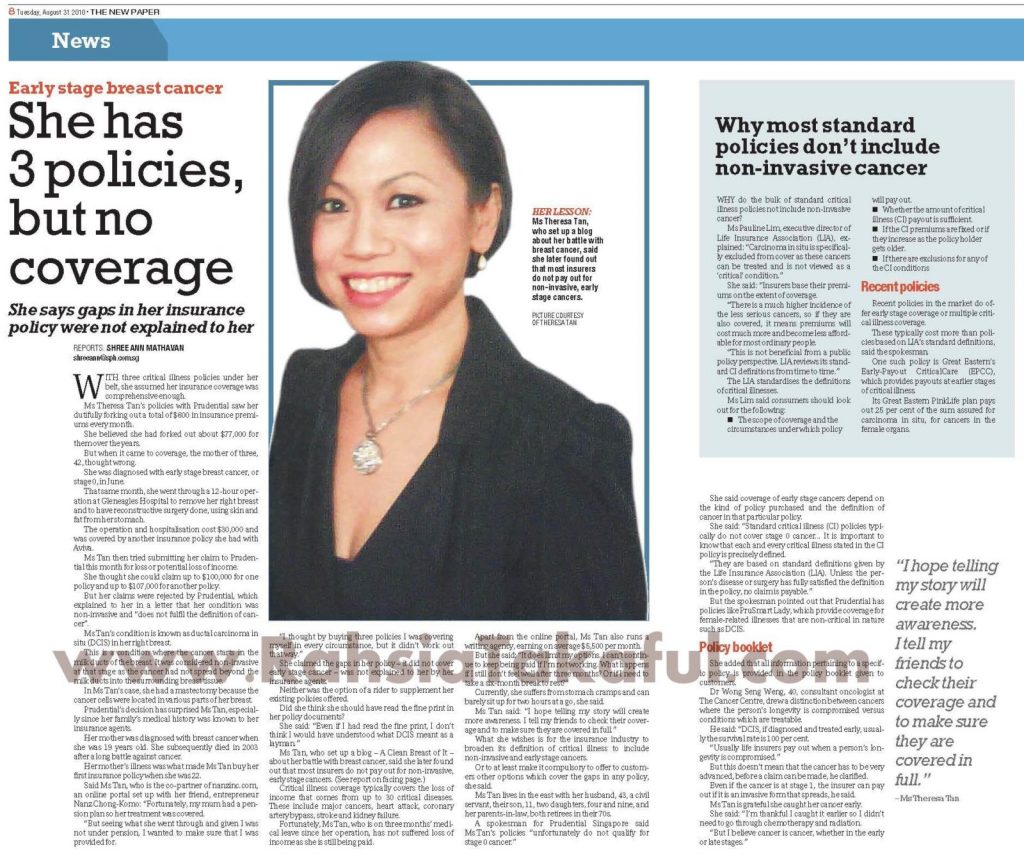 3 Policies, But No Coverage

WITH three critical illness policies under her belt, she assumed her insurance coverage was comprehensive enough.

Ms Theresa Tan’s policies with Prudential saw her dutifully forking out a total of $600 in insurance premiums every month.

She believed she had forked out about $77,000 for them over the years. But when it came to coverage, the mother of three, 42, thought wrong.

She was diagnosed with early stage breast cancer, or stage 0, in June.

That same month, she went through a 12-hour operation at Gleneagles Hospital to remove her right breast and to have reconstructive surgery done, using skin and fat from her stomach.

The operation and hospitalisation cost $30,000 and was covered by another insurance policy she had with Aviva.

Ms Tan then tried submitting her claim to Prudential this month for loss or potential loss of income.

But her claims were rejected by Prudential, which explained to her in a letter that her condition was non-invasive and “does not fulfil the definition of cancer”.

Ms Tan’s condition is known as ductal carcinoma in situ (DCIS) in her right breast.

In Ms Tan’s case, she had a mastectomy because the cancer cells were located in various parts of her breast.

Prudential’s decision has surprised Ms Tan, especially since her family’s medical history was known to her insurance agents.

Her mother was diagnosed with breast cancer when she was 19 years old. She subsequently died in 2003 after a long battle against cancer.

Her mother’s illness was what made Ms Tan buy her first insurance policy when she was 22.

Said Ms Tan, who is the co-partner of nanzinc.com, an online portal set up with her friend, entrepreneur Nanz Chong-Komo: “Fortunately, my mum had a pension plan so her treatment was covered.

“But seeing what she went through and given I was not under pension, I wanted to make sure that I was provided for.

“I thought by buying three policies I was covering myself in every circumstance, but it didn’t work out that way.”

She claimed the gaps in her policy – it did not cover early stage cancer – was not explained to her by her insurance agents.

Neither was the option of a rider to supplement her existing policies offered.

“What does this term mean?”

Did she think she should have read the fine print in her policy documents?

She said: “Even if I had read the fine print, I don’t think I would have understood what DCIS meant as a layman.”

Ms Tan, who set up a blog – A Clean Breast of It – about her battle with breast cancer, said she later found out that most insurers do not pay out for non-invasive, early stage cancers.

Critical illness coverage typically covers the loss of income that comes from up to 30 critical diseases. These include major cancers, heart attack, coronary artery bypass, stroke and kidney failure.

Fortunately, Ms Tan, who is on three months’ medical leave since her operation, has not suffered loss of income as she is still being paid.

But she said: “It does limit my options. I can’t continue to keep being paid if I’m not working. What happens if I still don’t feel well after three months? Or if I need to take a six-month break to rest?”

Currently, she suffers from stomach cramps and can barely sit up for two hours at a go, she said. Ms Tan said: “I hope telling my story will create more awareness. I tell my friends to check their coverage and to make sure they are covered in full.”

What she wishes is for the insurance industry to broaden its definition of critical illness to include non-invasive and early stage cancers.

Or to at least make it compulsory to offer to customers other options which cover the gaps in any policy, she said.

Ms Tan lives in the east with her husband, 43, a civil servant, their son, 11, two daughters, four and nine, and her parents-in-law, both retirees in their 70s.

A spokesman for Prudential Singapore said Ms Tan’s policies “unfortunately do not qualify for stage 0 cancer.”

She said coverage of early stage cancers depend on the kind of policy purchased and the definition of cancer in that particular policy.

She said: “Standard critical illness (CI) policies typically do not cover stage 0 cancer… It is important to know that each and every critical illness stated in the CI policy is precisely defined.

“They are based on standard definitions given by the Life Insurance Association (LIA). Unless the person’s disease or surgery has fully satisfied the definition in the policy, no claim is payable.”

But the spokesman pointed out that Prudential has policies like PruSmart Lady, which provide coverage for female-related illnesses that are non-critical in nature such as DCIS.

She added that all information pertaining to a specific policy is provided in the policy booklet given to customers.

Dr Wong Seng Weng, 40, consultant oncologist at The Cancer Centre, drew a distinction between cancers where the person’s longevity is compromised versus conditions which are treatable.

He said: “DCIS, if diagnosed and treated early, usually the survival rate is 100 per cent.

“Usually life insurers pay out when a person’s longevity is compromised.”

But this doesn’t mean that the cancer has to be very advanced, before a claim can be made, he clarified.

Even if the cancer is at stage 1, the insurer can pay out if it is an invasive form that spreads, he said.

Ms Tan is grateful she caught her cancer early. She said: “I’m thankful I caught it earlier so I didn’t need to go through chemotherapy and radiation.

“But I believe cancer is cancer, whether in the early or late stages.”

Why most standard policies don’t include non-invasive cancer

WHY do the bulk of standard critical illness policies not include non-invasive cancer?

MsPauline Lim, executive director of Life Insurance Association (LIA), explained: “Carcinoma in situ is specifically excluded from cover as these cancers can be treated and is not viewed as a ‘critical’ condition.”

She said: “Insurers base their premiums on the extent of coverage.

“There is a much higher incidence of the less serious cancers, so if they are also covered, it means premiums will cost much more and become less affordable for most ordinary people.

“This is not beneficial from a public policy perspective. LIA reviews its standard CI definitions from time to time.”

The LIA standardises the definitions of critical illnesses.

Ms Lim said consumers should look out for the following:

The scope of coverage and the circumstances under which policy will pay out.
Whether the amount of critical illness (CI) payout is sufficient.
If the CI premiums are fixed or if they increase as the policy holder gets older.
If there are exclusions for any of the CI conditions

These typically cost more than policies based on LIA’s standard definitions, said the spokesman.

One such policy is Great Eastern’s Early-Payout Critical Care (EPCC), which provides payouts at earlier stages of critical illness.

Its Great Eastern PinkLife plan pays out 25 per cent of the sum assured for carcinoma in situ, for cancers in the female organs.